The President of the United States is a deranged liar who surrounds himself with sycophants. He is also functionally illiterate and intellectually unsound. He is manifestly unfit for the job. Who knew? Everybody did.

I am not inclined to read the new Michael Wolff blockbuster that purports to detail how utterly unfit for the presidency is Donald J. Trump. Why read the book? We’ve all been watching the play for nearly two years. 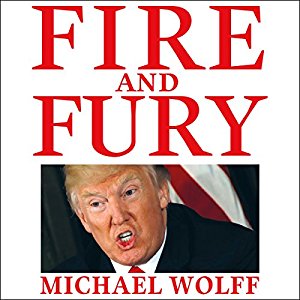 The fact that Wolff’s “revelations” have been widely described as an “open secret” among Washington reporters and members of Congress tells us a good deal about how perilously screwed up our politics have become. Virtually everyone knows the president of the United States is a dangerously unbalanced narcissist, hard pressed to control his instincts whether he is eating a second Big Mac or tweeting his daily insult.

Is anyone really surprised? No, of course not. Because we see it all with our own eyes every time we turn on the television. Trump has an attention span to match his tiny hands. He doesn’t read anything – ever. He can hardly string together a coherent thought. His grasp of the details of the most difficult job in the world are way, way beyond him. His grasp of history begins with his birth and ends with The Apprentice. And the president’s court enablers are a shameless collection of hacks, bootlickers and family members and, as is increasingly obvious, there is a lot of corruption in this crowd.

No one save Trump and his sleaziest current operative Stephen Miller – well, OK Sarah Sanders too, but she hardly counts since she has been appropriately cast as the Trumpian Court’s chief prevaricator – is really denying the essentials of the Wolff book. Quibble over the details, if you will, and bemoan Wolff’s own self-importance and his sloppy copy editing, what he writes still has the overwhelming stench of truth. We’ve all seen it for months. Who you gonna believe? Donald Trump or your lyin’ eyes?

The essential truth is this: Trump is not up to the job. He’s not even remotely intelligent in the way leaders must be. He lacks a shred of empathy and Trumpian self-awareness is as rare as a degree from his phony university. The man is a world-class con man who by virtue of a political fluke became president of the United States. To say that Trump is out of his depth is to say that Lincoln was a “political genius.” Neither label does either man justice.

The fact that our political process cannot provide the information and action to correct this disgusting and dangerous show is the real story here. Good for Michael Wolff, I guess, for making a bundle while pointing out the obvious.

Still, this mess – yes, it is a bigly one – does beg a few ongoing questions. I know it is difficult to sort out what really matters from the daily barrage of nonsense, so here goes.

There are increasingly serious questions concerning Trump’s cognitive decline and the fact that we have no realistic way to deal with that issue. A medical doctor, James Hamblin, recently wrote a piece every member of Congress – and the public – should read. Hamblin carefully avoided passing medical judgment on Trump’s mental state, but he did note several issues that raise serious questions.

“If Trump’s limited and hyperbolic speech were simply a calculated political move—he repeated the phrase ‘no collusion’ 16 times in the Times interview, which some pundits deemed an advertising technique—then we would also expect an occasional glimpse behind the curtain. In addition to repeating simplistic phrases to inundate the collective subconscious with narratives like “no collusion,” Trump would give at least a few interviews in which he strung together complex sentences, for example to make a case for why Americans should rest assured that there was no collusion.

Or there is this from James Fallows writing recently in The Atlantic: “We have something known as the Dunning-Kruger effect: the more limited someone is in reality, the more talented the person imagines himself to be. Or, as David Dunning and Justin Kruger put it in the title of their original scientific-journal article, “Unskilled and unaware of it: how difficulties in recognizing one’s own incompetence lead to inflated self-assessments.”

Trump World has festered into a steamy swamp of tawdry, ludicrous craziness that keeps most of us – and the political press – on edge, all the time. It’s hard to see the forest for the crazy trees. The white nationalist joker Steve Bannon is the latest case in point.

Elevated first by Trump who made Bannon his chief campaign strategist, then brought into the White House where every D.C. reporter vied to be the one to see the chicken scratches on his “strategic” white board – remember this disheveled clown actually sat for a while on the National Security Council – then dismissed by Trump only to re-emerge as the political genius behind Roy Moore’s campaign in Alabama.

Having directly contributed to the loss of a safe Republican Senate seat by embracing a credibly accused child molester, Bannon returned to his click bait, conspiracy theory peddling “news” site to troll Mitch McConnell and Paul Ryan and preach the old populist gospel of white nationalism, protectionism and retreat on the world stage. Finally, Bannon gets, temporarily one assumes, his comeuppance thanks to Michael Wolff’s word processor.

But wait! Bannon has now, as the Washington phrase describes such things, “walked back” his criticism of Donald Trump, Jr. and kind of apologized. He did not, however, say he was misquoted by Wolff, but instead that he was really trashing a guy under indictment (Paul Manafort) as opposed to the president’s son who will soon be under indictment. For the record, Bannon did not “walk back” his portrayal of Trump he just changed his story in hopes of changing the story.

The National Review’s Jonah Goldberg said it perfectly. “Bannon is a common character in Washington: a megalomaniac who made the mistake of believing his own bullshit.” Anyone in politics for any length of time encounters characters like Bannon – full of themselves, full of BS, and totally devoid of accomplishment, other than, of course, self-aggrandizement. In a curious way, Trump and Bannon deserve each other: two classless, clueless “smartest guys in the room” who wouldn’t last fifteen minutes in a responsible corporate board room or in a serious political office.

And, yes, the D.C. press corps, which should be able to spot this kind of charlatan as far away as “K” Street, has been utterly complicit in Bannon’s rise and now fall and soon his resurrection. It is so completely telling that Bannon offered Trump his faux mea culpa about the Wolff book though the daily newsletter of Axios’ Mike Allen rather than using his own “news” organization. Allen is Washington’s prime example of an access journalist who values nothing more than being the transmission belt for the kind of B.S. Bannon and the White House dish daily. And like Trump, Bannon craves the attention of the establishment that he works so hard to dismiss as evil.

Prediction: And you heard it here first, Bannon will successfully patch things up with Trump. He has to.  And Mike Allen will be the first to report it. In order to survive Bannon needs to breathe the same oxygen Trump inhales. Any little slice of this absurdity is all the proof you need that the White House is, as Tennessee Senator Bob Corker said before he subsequently lost his nerve, “an adult day care center.”

So, nothing – nothing – you have read or heard or shook your head about over the last several days represents any shocking new surprise. There are no revelations here really. We’ve seen this level of incompetency, bizarreness, craziness and danger for months and months. And it will get worse.

There are only two questions left to ask: how badly will this end and why does anyone with an ounce of integrity or a thimble full of honor work in this carnival funhouse?

The answer to the second question can only be that power or proximity to power, status or the perception of status, and money or the prospect of making more money are powerful motivators. It may be a circus, but it least the clown suit fits.

But how to explain a Rex Tillerson, a H.R. McMaster, a John Kelly? Serious people, apparently, who one must conclude are just hanging on to keep this runaway train more or less on the tracks. Explaining Congress is easier: Unprincipled, unbridled opportunism is an old, old American political trait.

Still, imagine telling your grandkids: the highlight of our professional life was working in/with the Trump Administration! The grandkids will return the Christmas presents.

The answer to the first question is more difficult – how will this end? Instability breeds instability. Madness begets madness. The immediate future is more instability beset with more madness.

As Masha Gessen says in a New Yorker column, “A year in, the Trump Presidency remains unimaginable. To think that a madman could be running the world’s most powerful country, to think that the Commander-in-Chief would use Twitter to mouth off about whose nuclear button is bigger or to call himself a ‘very stable genius,’ verges on the impossible.”

But, it has become possible. This entire tragic circus exists no matter how defiantly Congressional Republicans avert their eyes or White House aides or Cabinet secretaries abet the emperor with long ties, but no clothes. We are headed for the inevitable Constitutional crisis over Russia – yes, there will be collusion uncovered and money laundering and likely a good deal more – or, perhaps even sooner, we will be forced to confront Trump’s unfitness in some other way. It will happen.

My wish for the New Year: As long as we are going to have a Constitutional crisis let’s get it over with.