“Why are we having all these people from shithole countries come here?”

Donald J. Trump, meeting with members of Congress about immigration

I grew up in western Nebraska and South Dakota. My mother and dad, and folks on both sides of our family, lived in this part of Middle America for generations. Some still do. These places – the sandhill country of Nebraska, the Black Hills of South Dakota – are part of my personal story. It is impossible, I think, not to be formed by the landscapes, the rhythms, the attitudes of “our” places. I grew up white in white America. It was who I was.

It wasn’t until we moved to Rock Springs, Wyoming – I was entering the seventh grade – that I really had personal exposure to people different than my family and me. It’s not an overstatement to say that place changed my life.

Rock Springs, a tough, blue collar railroad and coal town, remains the most ethnically diverse place I have ever lived. I got acquainted with and played basketball in the high desert of southwestern Wyoming with a couple of African-American teammates, the best players on the team. One kid had a Japanese-American background, another Hispanic, and others could trace their ancestry to southern Europe. Our neighbors played bocce, a game as foreign to me as polo, but as common in Italy as baseball is here. My mother and dad were invited to a Greek wedding in Rock Springs. That was an eye opener for those Cornhuskers.

And she may not have known it, but I had a serious crush on a girl named Johanna. She was Jewish, I think, and as I recall her ancestors emigrated from Poland. She was also the smartest kid in my class – quiet, studious, serious. I wonder to this day if she has had a good life.

Those years in Rock Springs have stuck with me for lots of reasons, but mostly for what the daily exposure to kids and cultures different than me – a kid of modest middle class white privilege – did to change my view of my country and myself. After a few years in Wyoming we moved back to South Dakota, sixty miles as the crow flies from the Pine Ridge reservation, the land “given,” as white folks like to say, to the Oglala Lakota band of Sioux.

I had no immediate epiphany about race and class as I started high school, but something happened, gradually, after that move back to the prairie. The routine white culture stereotyping of Native Americans – they can’t handle their booze, they’re lazy, they’re happy in their poverty – started to sound odd and wrong to me. I had played ball with and against some of these guys. They were anything but lazy.

Would not a Sioux culture that produced a Crazy Horse, a Sitting Bull, or a brilliant historian like a Vine Deloria, Jr. be worthy of celebration? Why did so much of the dominant white culture demean the native culture? Why did folks who had never had a conversation with a Native America make up stories? What did they fear? Why did they say those things?

Coming from people I knew and liked these often-hateful comments, a variation of “the soft bigotry of low expectations,” made me understand, really for the first time, that such attitudes are learned behavior. No one is born a bigot. Racism is not genetic. Attitudes about race and class, like table manners, are learned behavior. My native land seemed awash in ignorant stereotypes that made those not like us, less than us.

I found it difficult and awkward to confront someone who said something not just wrong, but hateful. The easy thing to do is to cringe, be quiet and move on. But in the long run that sort of attitude – staying quiet, not speaking, letting it slide, may be even more damaging than the harmful, hateful words of a bigot.

I admit I’ve not always spoken up and too many times I’ve looked at my shoes wondering what to do or say. I knew what I felt. Few of us want to create a scene or risk a relationship by actually exercising the courage of our convictions. Now, I’m too old, seen too much and believe too much in the idea of America to bite my tongue. By not confronting the kind of hate we have seen from the top of American politics for the last two years we encourage it. We condone by not condemning.

The old, enduring Republic we have – and I hope will continue to have – has been confronting over the last few days yet another moment that cries out for moral clarity. I applaud those who have spoken out against obvious racism and I wish many more had voiced objection, spoken moral truth to power. Those who where there and have said nothing are as guilty as I have been when I sat quietly while some joker popped off in a bar, in the office or at a family gathering. Bigots love a moral vacuum. Exposure, condemnation and rejection are the disinfectant racists cannot tolerate. You don’t defeat evil by pretending not to hear it or see it. 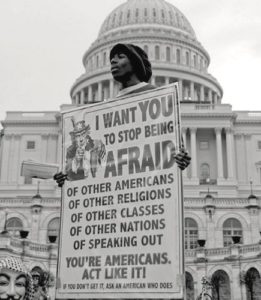 There is no excusing the timid, ignorant, small and bigoted man who happens to occupy the office Lincoln once held. He is a product of his environment. For crying out loud his father marched in a Klan rally. His inherited wealth reeks of his white privilege, even as he fails to acknowledge his own immigrant story or that two of his three wives came here by choice. His entire campaign for the highest office in the land was built on a foundation of division and discord. He is so fundamentally lacking in self-awareness – or so overwhelmingly invested in continually appealing to the very worst among his followers – that he will never be different. We can bemoan that, but we need not accept it or act as if it does not matter. It does matter. Racism thrives in denial.

We can all say, loud and often – not in my country, not given all our history, not in this land we appropriated from those who really are the original Americans. No, it is not going to happen in this country built on the backs of slaves. Not in my country where immigrants – my ancestors and surely yours – did the crappy jobs, believed in the dream and saved and scrimped so that we might go to school, live in a decent house and afford health insurance.

Philip Kennicott, writing in the Washington Post, asks the right question about this moment of moral clarity. “What I want to know is how the men in the room with him reacted,” Kennicott wrote this week. “This is the dinner table test: When you are sitting and socializing with a bigot, what do you do when he reveals his bigotry? I’ve seen it happen, once, when I was a young man, and I learned an invaluable lesson. An older guest at a formal dinner said something blatantly anti-Semitic. I was shocked and laughed nervously. Another friend stared at his plate silently. Another excused himself and fled to the bathroom. And then there was the professor, an accomplished and erudite man, who paused for a moment, then slammed his fist on the table and said, ‘I will never listen to that kind of language, so either you will leave, or I will leave.’ The offender looked around the table, found no allies and left the gathering. I don’t know if he felt any shame upon expulsion.”

We know the man who brought us to our moment of clarity knows no shame. But what about those who were there and heard him, observed his body language, wondered if what they had just heard could possibly be in the heart and on the lips of the president of the United States?

There are issues that transcend politics, that speak to bigger, more important truths. The current occupant of the White House again forces us to confront a fundamental question of human existence: who are we and what do we want to be?

If we speak up now we are answering that question.

If we stay silent we answer as well.