We don’t know the precise path the next few months will take. There will be resistance and denial and counterattacks. But it seems likely that, when we look back on this week, we will see it as a turning point. We are now in the end stages of the Trump Presidency.

There are now four types of people in the United States.

One type, slightly over 50 percent of white adults according to an ABC News poll, support the president of the United States. Older white folks are the Trump base. But it is still an astounding number and speaks at some level to the fundamental racial divide in the country since it is more and more clear that Donald Trump’s core appeal has always been racial, the oldest, most toxic play in American politics. Yet, it is also clear as Trump has said that he could stand in the middle of Fifth Avenue, and well, you know do anything and not endanger support from “his base.” The true believers are one type. 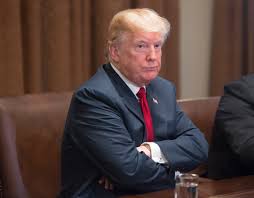 A second type of American, perhaps best exemplified by current House Speaker Paul Ryan, enables the president while ignoring him in order to accomplish a handful of highly partisan or personal goals – a giant tax cut for corporate America and the wealthiest among us, a much more conservative judiciary for a generation or victory in a Republican primary where fidelity to Trump is the only issue. The morality of this group is on display if not their patriotism. They see. They might even cringe. But they persist. He is an idiot after all, but a useful one.

A third type of American, a handful of elected Republicans among them, seem to believe that Trump’s ethical and legal misdeeds, his trashing of long-established norms of political behavior, his insult filled rants, and his delusional foreign and economic policy will eventually fade away. We must just let all this run its course. It will all work out they say. Common sense and the American Republic will soon enough return, these optimists hold. One hopes they are right, while suspecting they are not.

And the fourth type is, well, folks like me. People who believe Trump represents an existential threat to our politics and our culture. Indeed his daily shredding of truth and decency, his attacks on a free press, the courts and the rule of law are destroying, as Financial Times columnist Edward Luce has written, the very idea of classic western liberalism.

“Western liberal democracy is not yet dead,” Luce writes in his brilliant and frightening book The Retreat of Western Liberalism, “but it is far closer to collapse than we may wish to believe. It is facing its gravest challenge since the Second World War. This time, however, we have conjured up the enemy from within. At home and abroad, America’s best liberal traditions are under assault from its own president. We have put arsonists in charge of the fire brigade.” 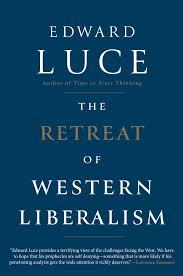 Luce’s 2017 book chillingly describes the retreat of western liberalism in places like Poland and Hungary and he correctly places Trump and America in this context. Trump has shown us at least one thing, which in my lifetime has not been as crystal clear as it now is: our system of checks and balances, the conventions of acceptable political and ethical behavior are really very, very fragile. It has actually been quite easy for a would-be autocrat to drive us to the edge of chaos and political breakdown. All it has taken is a reality show personality, a capacity to lie with abandon, an appeal to racial divide and a Twitter account.

And now after months of constant disruption and the kind of behavior that would have doomed any previous president we have arrived at the point of reckoning of sorts. The president of the United States is increasingly cornered, frightened, more erratic and unfocused than normal. He is at war with his own Justice Department and the FBI. Michael Cohen, his long-time personal lawyer – a wise guy character right out of Goodfellas or A Bronx Tale– is almost certainly going to be indicted, likely for a host of misdeeds directly and indirectly bearing on Trump.

When it all becomes public the Trump story – at its core the story of a profoundly flawed, deeply troubled man who has no business visiting the Oval Office let alone working there – will make Nixon’s Watergate or Harding’s Teapot Dome look like a small time embezzlement job at a church bake sale.

We are about to see with the Trump fiasco, as Churchill said after the long twilight of the first three years of World War II and after a victory at El Alamein, “not the end. It is not even the beginning of the end. But it is, perhaps, the end of the beginning.”

The end of the beginning. And Trump knows it is coming. His Twitter account screams acknowledgement. He may be able to compartmentalize his dishonesty and selectively forget what is inconvenient to remember, but he knows his decade’s long haphazardly constructed house of cards – what an appropriate analogy – is going to crumble.

Vladimir Putin, yes even he knows it is coming, Yet, unlike the rest of us Putin is a winner no matter what becomes of Trump because his whole game has been to show how abjectly corrupt American democracy can become. The mess Trump has made – his own corruption and dishonesty, the lying, the Scott Pruitt’s, The Mooches, the Newt Gingrich’s and Rudy Giuliani’s, the degrading of decency, the wholesale cashiering of a once-proud political party – none of that will be automatically fixed when Trump is gone. It will take years to correct this mess, if it is even possible.

Putin’s aim was to destroy American leadership around the world, fray the NATO alliance and pit the U.S. against China. He wanted to walk back what until just a few years ago seemed to be the relentless history of democratic expansion around the world. Now, as Ed Luce points out, there are 25 fewer democracies in the world today than there were just 18 years ago.

Putin’s dream has worked better than any KGB plotter could possibly have envisioned. Meanwhile, the thug from St. Petersburg emerges as a new Middle East power broker, the new most interesting man in the world, the man who will keep pointing out that America is broken and corrupt and leaderless.

The only question left is whether Trump burns down what is left of the structure of American law and norms or whether enough righteousness remains in the hollow souls of the president’s GOP enablers to stop him short of political Armageddon.

The Lawfare blog’s Benjamin Wittes wrote recently that we have known for months the ultimate blow up was looming, but it “has ripened slowly and, while in plain view, in a fashion that has permitted people to avert their gaze. Those who wanted to deny that the confrontation was coming at all could convince themselves that perhaps Special Counsel Robert Mueller’s investigation would peter out; perhaps it would reveal only misconduct by expendable hangers-on in the president’s entourage; perhaps it would reveal only politically embarrassing conduct rather than conduct that required elements within the executive branch to lock horns over whether the special counsel would be meaningfully permitted to accuse the president.”

The raid on Michael Cohen’s law office, home and hotel room ended all ability to avert our gaze. This is what a Constitutional crisis looks like. If we survive it historians will be studying this moment for years, books will be written and everyone will claim to have seen it coming even though it is often difficult to see things happening in plain sight.

The end of the beginning of the Trump unraveling comes – as Putin and his Kremlin pals must be celebrating – while eight of the top ten jobs at the U.S. State Department sit vacant and while the CIA’s top leader is leaving for State and both he and his announced replacement, an architect of torture policy, face bruising confirmation fights. The unraveling comes while American troops flail away without strategy or leadership in Syria and Afghanistan and while the White House chief of staff has lost all ability to manage the daily drama in the West Wing.

But the rest of us, the Paul Ryan’s, the hopeful Republicans and the worried Democrats, the midnight worriers, must hope the end comes quickly and with minimal collateral damage. But does anyone really think Donald J. Trump will suddenly find reason and common sense and go quietly or reasonably as the circle closes around him? Of course not.

The Boston Globe’s Michael A. Cohen, not to be confused with the Trump Tower wise guy, wrote last week: “we have a president who will do anything to save his own skin. He cares not one whit about the law, ethics, norms, or the good of the country. As has always been the case, Trump’s only concern is Trump.”

Trump will go down. The events of the last week make that all the more certain. How much farther down Trump takes our country is what keeps some of us awake at night. Trump is an existential threat to the long American experiment. And that is no hyperbole and it is certainly no joke.