“Not everything done by Lenin was carefully conceived. In particular, he had little foresight about what he was doing when he set up the centralized one-party state. One of the great malignancies of the twentieth century was created more by off-the-cuff measures than by grandiose planning…Lenin eliminated concern for ethics. Lenin justified dictatorship and terror. Lenin applauded the political vanguard and the need for firm leadership. Lenin convinced his party that his Marxism was pure and that it embodied the only correct policies.”

One hundred years ago this month the world changed. Not for the better.

In many ways the “revolution” that toppled the Russian Czar and ultimately led to the formation of what we used to call the Soviet Union was an unthinkable event in both Russia and in the rest of the world. Across the political spectrum, American politicians, with a few exceptions, recoiled at the thought of a Lenin, a Stalin or a Trotsky establishing the first communist state and not incidentally a bridgehead from which to export revolutionary political thought and action. The coming to power of the Bolsheviks was, in many ways, just as unthinkable in Mother Russia.

As Anne Applebaum, an insightful historian of all things Russian, pointed out in a recent Washington Post essay: “At the beginning of 1917, on the eve of the Russian revolution, most of the men who would become known to the world as the Bolsheviks had very little to show for their lives. They had been in and out of prison, constantly under police surveillance, rarely employed. Vladimir Lenin spent most of the decade preceding the revolution drifting between Krakow, Zurich and London. Joseph Stalin spent those years in the Caucasus, running protection rackets and robbing banks. Leon Trotsky had escaped from Siberian exile was to be found in Viennese coffee shops; when the revolution broke out, he was showing off his glittering brilliance at socialist meeting halls in New York.”

A few months later these losers of distinction were in power exercising a ruthless stranglehold on the population and eliminating every visage of what had been for a few months a fledgling democracy. Oh, and of course, they brutally eliminated their opponents.

At the heart of the “revolution” of one hundred years ago – Applebaum says it was more correctly a coup d’état – was, for sure, violence, but also audacious and persistent lying.

“All through the spring and summer of 1917,” Applebaum writes, “Trotsky and Lenin repeatedly made promises that would never be kept. ‘Peace, Land, and Bread’?” The Bolshevik leaders lied about their own past and they lied about the scandalous deal Lenin struck with the Kaiser’s Germany that allowed him to return from exile to be in Petrograd when his moment came.

Putin and the Politics of Lying…

It was the birth moment of decades of lies, misdirection and tragedy that finally seemed to end with the dramatic break up of the Soviet Union in 1991. But, that conclusion may well have proven to be premature – or fatally incorrect – given the state of the Russian experience since Mikhail Gorbachev gave the world fleeting hope that the old Soviet empire might indeed enjoy a new birth of freedom. Vladimir Putin took care of that hope.

The former KGB goon now stands astride a government as corrupt and venal as most anything Lenin could have dreamed up. Putin has also succeeded where so many of Lenin’s successors failed. He has gotten the United States and much of the West to question its own democratic exceptionalism, while helping advance a new narrative based on old Soviet tactics of constant misrepresentation, doing away with opponents, press manipulation and – that word again – steady, unremitting lying.

As a special counsel and several Congressional committees probe the level of Russian influence in the last election and quite potentially the active collaboration with Russian actors by a host of individuals in Donald J. Trump’s political orbit, we should remember some recent and not-so-recent history.

During decades of Communist rule in the old Soviet Union, skepticism or outright hostility to the leaders in the Kremlin became an article of political faith for American political leaders. Presidents from Woodrow Wilson to Ronald Reagan were always wary and occasionally warlike in denouncing the dangers emanating from a non-democratic state ruled by greedy men consumed by their own lies. Stalin pioneered the Russian practice of simply erasing his opponents from history. Putin, his modern day successor, now controls a vast international propaganda network – it operates openly and brashly in the United States – that embeds the modern Kremlin line in your daily social media feed.

In the not too distant past most Americans who argued for some type of accommodation with the Soviet Union – think of Henry Wallace, a one-time vice president who saw his political career crumble under allegations of being “soft on the Reds” – were relegated to the political margins, their reputations tainted.

Skepticism of Russia Was Once Just Good Politics…

Entire political careers – Nixon, Joe McCarthy, Reagan, even JFK – were built around the belief that Soviet Russia presented an existential threat to the west and, in particular, to the United States. Few elections were lost from 1920 to 1990 by candidates who adroitly played this Russia card. The last real Republican presidential candidate, Mitt Romney, was mocked for his prescient observation that Putin’s Russia continued to present the gravest kind of threat to American interests.

My how things have changed. With Trump in the White House his Republican Party appears to work every way from Sunday to cozy up to Putin, the new Russian Czar. On this level alone Putin’s classic disinformation campaign directed at western democracy has succeeded beyond Lenin’s wildest dreams.

As conservative columnist Jennifer Rubin observed recently, the Trump Administration is up to its neck in Russians. “We have never seen such a multiplicity of connections,” Rubin wrote, “to a hostile foreign power and lack of transparency in a presidential campaign or administration — nor have we ever had a campaign in which Russians interfered in such a widespread and deliberate manner.”

Up to Its Neck in Russians…

Consider just some of the news of the last several days:

A Trump campaign foreign policy advisor pled guilty to lying to the FBI about his contacts with Russians during the 2016 campaign and the details of his contacts continue to seep out.

Campaign manager Paul Manafort and his chief deputy were indicted for a variety of alleged illegal sins, including laundering Russian (or Ukrainian) money through a Russian-connected bank in Cyprus.

Commerce Secretary Wilbur Ross was found to have his own Russian connections – with members of Putin’s own family no less – thanks to the leak of a trove of offshore banking and corporate documents. It was reported earlier in the year that Ross had helped engineer deals with Russian oligarchs while the vice chairman of that interesting little Cypriot bank. 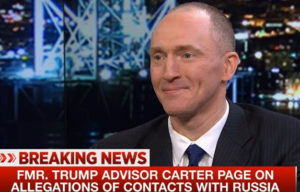 The comically inept Carter Page, another Trump campaign operative, appears destined to become the G. Gordon Liddy of the current Russian caper. (Liddy, for the post-Watergate generation, helped plan and carry out the break in of the Democratic National Committee offices in the Watergate complex in 1972. He was a conspiracy theorist and more than a bit odd. Liddy served nearly a year in prison for his Watergate role before becoming a rightwing radio talk show host.) Page’s recent testimony to a House committee marks this nutty Trump campaign character as either a fool or as a deeply implicated collaborator with the Russians, or perhaps both.

Facebook, Twitter and Google have recently testified about the extent – as far they know or are willing to admit – of Russian propaganda contaminating their technology platforms. It is now beyond any reasonable doubt that Russian agents accomplished a massive disinformation campaign designed to influence the 2016 presidential election in Donald Trump’s favor, while generally creating havoc in the American body politic. 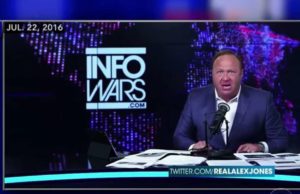 Alt-right “news” sites such as the conspiracy fueled website Infowars actively helped peddle Putin’s propaganda. Since 2014 Infowars has republished more than 1,000 articles pulled directly from RT, the Kremlin funded “news” platform that operates openly in the U.S. Infowars, you may recall, peddled completely phony stories about refugee crimes in southern Idaho and stoked the “Pizzagate” garbage that gained substantial traction during the last presidential campaign.

The conservative Drudge Report website, the second most visited Internet site in the United States, has also repeatedly linked to stories that originated within the Russian propaganda universe. One headline posted at Drudge on November 7, 2016 – Election Day – simply said “Obama Encourages Illegals to Vote.” The story was total B.S. and totally manufactured by Putin’s RT.com lie factory.

Meanwhile the president of the United States continues to side with Vladimir Putin against the unanimous conclusion of the nation’s intelligence services on whether Russia meddled in his election.

“He says that very strongly,” Trump said in describing his conversations with Putin during a summit meeting in Vietnam, “he really seems to be insulted by it, and he says he didn’t do it. He is very, very strong in the fact that he didn’t do it. You have President Putin very strongly, vehemently, says he has nothing to do with that. Now, you are not going to get into an argument, you are going to start talking about Syria and the Ukraine.”

For good measure Trump described the former directors of National Intelligence and the CIA, men who have testified under oath about Russian interference, as “political hacks.” As The Atlantic’s David Frum notes, “These are not the actions of an innocent man, however vain, stubborn, or uniformed.”

Back to Anne Applebaum, the Russian scholar. “Remember: At the beginning of 1917, on the eve of the Russian revolution, most of the men who later became known to the world as the Bolsheviks were conspirators and fantasists on the margins of society,” she wrote recently. “By the end of the year, they ran Russia. Fringe figures and eccentric movements cannot be counted out. If a system becomes weak enough and the opposition divided enough, if the ruling order is corrupt enough and people are angry enough, extremists can suddenly step into the center, where no one expects them. And after that it can take decades to undo the damage. We have been shocked too many times. Our imaginations need to expand to include the possibilities of such monsters and monstrosities. We were not adequately prepared.”

Who You Gonna Believe…

And, of course, we wait with trepidation to discover if the president of the United States, a man woefully ignorant of history and consumed by ego was himself an active Russian collaborator, an ignorant dupe, a greedy businessman or, as seems increasingly likely, all of the above.

As Chico Marx – no relation to Karl, but Groucho’s brother – once said, “who you gonna believe, me or your own eyes.”

Putin has already won a great victory in the West by using disinformation to fuel deep doubts about American institutions and the fundamentals of a democracy, particularly a free press. His victory has advanced the interests a perverted and dangerous 21st Century version of the kind of tyrannical state that Lenin set out to create a century ago, a place were truth and reason are turned upside down.

The questions for us a year into the Trump presidency is whether Putin will continue to get away with sabotaging American democracy or whether American institutions, including what remains of the political party Trump has hijacked, can end the corruption and begin to roll back the damage already done.