“Great president. Most people don’t even know he was a Republican. Does anyone know? Lot of people don’t know that.”
President Donald J. Trump riffing on Abraham Lincoln.
————–

I just finished reading a remarkable new book that has nothing and everything to do with the historically ignorant fellow who now occupies the Oval Office. The book – The Vast Southern Empire: Slaveholders at the Helm of American Foreign Policy by Matthew Karp – details, in a manner I have never fully appreciated, the political stranglehold southerners held over American foreign and military policy prior to the Civil War. 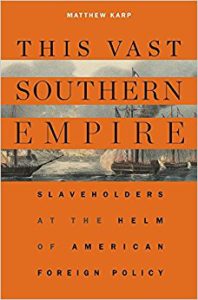 Karp, a historian at Princeton, has produced a truly fine book that not only manages to make interesting what might seem to be a dry subject in American history – pre-Civil War foreign policy – but he also illuminates why slaveholding southerners fought so hard to shape the country’s international posture. Spoiler alert: It was all about preserving slavery and its perceived economic benefits not only in the United States but also in much of the western hemisphere. Cuba and Brazil, for example, were slave nations and southerners reckoned that the U.S. could best preserve its “peculiar institution” by encouraging its survival, indeed expansion, in the hemisphere.

Southerners and others favorable to slavery dominated the American government and particularly our foreign and military policy, until 1860. Karp makes the observation that, “the antebellum president least sympathetic to slavery,” Zachery Taylor, “owned 300 slaves.” Abraham Lincoln’s election in 1860 was therefore seen as a profound threat to the “peculiar institution” and by the time Lincoln took the oath of office in 1861 the path to disunion was well worn by the secession of seven southern states.

“The national triumph of the Republican Party, a political organization that existed almost entirely in the non-slaveholding North, had no precedent in the history of the United States,” Karp writes. “Never in eighty years of American existence had the country been governed by a chief executive who openly opposed black servitude.”

Donald J. Trump doesn’t operate at this level of historic detail or nuance and never will. His amazing comments a while back seeming to express surprise that Lincoln was a Republican should have had every GOP precinct worker in American scratching their heads in disbelief. And his remarkably incoherent recent ramblings about Andrew Jackson and the Civil War present in striking relief just the level of the man’s lack of awareness, or even more seriously, his lack of interest.

Why Was There a Civil War?

Trump’s ignorance of history, and I’m talking just basic eighth grade level stuff here, was fully on display recently when he told journalist Selena Zito, “People don’t realize, you know, the Civil War, if you think about it, why? People don’t ask that question, but why was there a Civil War?”

The guy who likely couldn’t pass the civic and history test immigrants take to qualify for citizenship then opined that his new hero Andrew Jackson, dead 16 years before the Civil War began, was “really angry” about the whole business.

“I mean, had Andrew Jackson been a little later you wouldn’t have had the Civil War,” the president said. “He was a very tough person, but he had a big heart. He was really angry that he saw what was happening with regard to the Civil War, he said “There’s no reason for this.’”

Actually there was a reason – a very good one – for the Civil War: slavery.

It should probably be no great surprise that a president who wants to end federal support for libraries – the arts, humanities and public broadcasting, too – has a more tenuous grasp on American history than anyone who has ever occupied the office.

Trump’s historical – and historic – ignorance is no small, laughing matter, but rather deeply dangerous, potentially catastrophically so.  For as the esteemed Columbia University historian Eric Foner has said, “History does inform the present, and it should. That’s what I mean by a ‘usable past’:  a historical consciousness that can enable us to address the problems of society today in an intelligent manner.”

Writing in the New Republic Jeet Heer compared Trump’s historical ignorance to the “inebriated ramblings found on Comedy Central’s Drunk History.” We have come to expect a basic level of intelligence from the chief magistrate about the nation’s history, but Trump could no more pass a basic history quiz – an AP history course would leave him muttering – than he can speak in complete sentences. It is profoundly obvious that this vacuum of basic knowledge impacts policy and priorities, sometimes dangerously so.

Trump recently displayed his ignorance about China and Korea. He clearly doesn’t understand the complicated history of Russia and Ukraine or that his statement that Canada has treated the U.S. badly is total bunk. Trump’s open cheerleading for the far right National Front in France betrays a stunning lack of understanding of modern French history. If Trump knew anything about Vichy it must be that they bottle good water.

The president’s claim that it will be easy to bridge the Israeli-Palestine divide is the boast of someone who has never heard of the Balfour Declaration or has only a fragmentary understanding of the history of the 1967 Arab-Israeli war. Trump’s essential arrogance is on display in all these areas and a dozen more and his grasp of how history relates to current issues is driven by the worst possible combination of ignorance and hubris.

One more example: Journalist Dave Owen is out with a new book on the Colorado River, the over appropriated liquid lifeline of the American Southwest. As part of his reporting on the challenges which confront the Colorado, Owen talked at some length to candidate Trump. Owen’s assessment of Trump’s knowledge of the issues is both brutal and a quite typical of nearly everyone who has studied the guy.

“He knows as little about water as he does about anything else,” Owen said of the president. “He said you could solve your problems out there with a big pipeline to bring the water in, or you could do that thing when you take the salt out of the ocean – desalination.

“He definitely thinks there’s an easy solution, and he’ll discover that it’s really complicated. Water is a lot bigger than he is, and it will defeat him. The relationships, the legal structures, the international agreements – it’s all beyond anything that he could possibly comprehend.”

Any westerner with even a passing understanding of water, its uses and the complicated and contentious history of the resource knows that the president’s policy prescription – a big pipeline – is not just ridiculously naïve, but completely unrealistic.

A growing group of American historians have joined the “resistance” to such fundamental ignorance. Penn State historian Amy Greenberg recently told The New Republic, “I haven’t critiqued a sitting president before. I’m a historian.” But Trump’s broad misunderstandings and extraordinary lack of knowledge have her “speaking out in favor of elected officials knowing basic, elementary level U.S. history.”

“If we had an undergrad who wrote what Trump said in an essay,” Greenburg said of the president’s Civil War and Jackson comments, “that student would not pass that exam. That student would fail.”

A particularly pernicious aspect of Trump’s fumbling around with Civil War history is that it helps embolden the still very active “revisionist” view of what America’s great tragedy – the Civil War – and its enduring historical stain – human bondage – meant in the 19th Century and how those battles continue to play out.

As historian Manisha Sinha noted recently in the New York Daily News, “If nothing else, President Trump and the Republicans are making Civil War revisionism great again. A couple of weeks ago, North Carolina GOP state Rep. Larry Pittman argued that Abraham Lincoln was ‘the same sort (of) tyrant’ as Adolf Hitler, and was ‘personally responsible’ for the deaths of hundreds of thousands of Americans in an ‘unnecessary and unconstitutional’ war.”

The revisionist arguments go all the way back to the post-Civil War memoirs of various players in the great national conflict and was cemented on the silver screen with the epic 1939 film Gone With the Wind, a classic film that is also a classic case of spinning the war and its aftermath into a glorious narrative of chivalry, state’s rights and an elegant way of life.

Look no further than the current turmoil in New Orleans where Mayor Mitch Landrieu has led the charge to remove various Confederate monuments that the mayor says don’t illuminate southern history, but rather distort it. Demonstrators waving Confederate flags have disrupted the removal and contractors doing the work have received death threats. The entire episode, as the New York Times notes, “demonstrates the Confederacy’s enduring power to divide Americans more than 150 years after the cause was lost.”

Having a historically ignorant president stoking the already hot embers of “why was there was a Civil War” is simply piling on the racial and other divisions Trump has ridden all the way to the White House. He may be ignorant of his country’s history, but the ignorance serves his own, but not the nation’s, political interest. A president who cannot differentiate between Chinese and Korean interests in the matter of nuclear weapons or who views Middle East peace as a simple deal to be hashed out on the golf course only serves the interest of confusion and chaos, a dangerous mixture in a hair trigger world.

Harold Evans, a distinguished British historian and journalist, has the perfect way of describing what Trump (and others) do when they distort or refuse to understand history. “Dishonest leaders,” Evans wrote recently, “have learned nothing and forgotten everything.”

The United States in 2017 – this is where we are. Hug a historian, or at least read one. You will be doing what our president can’t and won’t do.