“They were careless people. They smashed up things and creatures and then retreated back into their money or their vast carelessness or whatever it was that kept them together, and let other people clean up the mess they had made.”

The convergence of two monumental political events – a Democratic victory in a weird Senate election in Alabama, of all places, and the emergence of the remarkably cynical and damaging GOP tax bill – bring into stark focus the degenerate state of the party of Lincoln, Teddy Roosevelt and Ronald Reagan.

In the Alabama election, the leader of the Republican Party made it clear that he was all in for a reliably accused child molester, while slandering the eventual Democratic winner for being “bad on crime.”  The guy who won the Alabama Senate seat, Doug Jones, is a former prosecutor who convicted the Ku Klux Klan murderers of five little girls in the infamous 16th Street Baptist Church bombing. Doug Jones is bad on crime like Donald Trump is good on the facts. 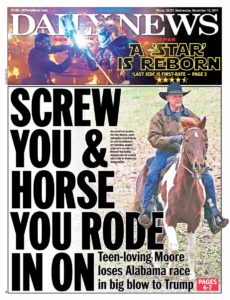 While Trump touted the creepy Roy Moore – the New York Daily News called him “teen-loving Moore” – holding a rally, tweeting and recording robo calls, the rest of the Republican Party, with very few exceptions, sat on its duff, unable to rouse even mild indignation at such moral degeneracy.

As conservative commentator Charlie Sykes put it: “At every stage of the run-up to this special election, Republicans could have resisted, pushed back, or drawn lines, but their failure to do so led them inexorably to this moment: the defeat of an unreconstructed bigot and ignorant crank who had the full-throated backing of the president they have embraced and empowered.”

To assert that the modern GOP – and the man-child heading it – lacks an intellectual, moral or ethical foundation is a little like observing that the décor at Mar a Lago is a bit overdone. The reality of where the new GOP and its supreme leader have taken the country – and increasingly the world – has become difficult to fathom, and that is a major part of our problem. There is so much turmoil, so much wrong, so much corruption and degradation – where to start?

As the country we once knew slips ever closer to authoritarian kleptocracy – and worse – the enablers of this increasingly dystopian nightmare pass tax cuts to enrich themselves and their donors and refuse to bestir themselves to offer even the most tepid condemnation of behavior that just months ago would have produced universal rejection.

We are caught in what the military and diplomatic historian Tom Ricks recently called the tragedy of a Trumpian America, where lying has become governance, where reckless ignorance masquerades as policy and where demagogues are unconstrained and therefore empowered. For the first time, Ricks says, and I agree, we fear for our country, a country were things are bad and all too likely to get much worse.

Ricks wrote recently in Foreign Policy, “People stuck inside tragedies often make the mistake of thinking they are nearing the end when they are only in Act I. And that is where I think we stand, still at the beginning of this long ride. All around us, the selfish and malevolent are thriving, flatterers are rising, and good people feel simply powerless.”

Let’s Cut Taxes for the Wealthy…

The GOP controlled Congress will pass a tax bill this week that violates almost everything the president said about taxes during the last campaign. His supporters, enablers and political functionaries are lapping it up. Lies have become policy.

The tax legislation is not directed at the middle class, as Trump said it would be, but at corporations and the wealthiest among us. After saying the tax legislation won’t benefit him we now know it certainly will, likely to the tune of millions of dollars due to a last minute slight of hand that helps real estate investors. The president’s children benefit, too, of course. Fiddling with the estate tax made sure of that. This is the kind of self-dealing enrichment that we once might have condemned in a third-world country presided over by a tin horn dictator. Rather than preventing this type of corruption, the GOP is writing it into law. And our tin horn dictator, feared by timid Republican souls who don’t dare risk the wrath of his Twitter habit, daily corrupts a government he knows little about and cares about even less.

But, hey, the tax cutters are getting what they dream about. Cutting taxes is, after all, what Republicans do and damn the consequences.

For years we’ve heard Republican politicians – guys like Idaho Senator Mike Crapo, a very conservative, Harvard educated lawyer – take to the stump to howl about exploding annual deficits and warn against the dire consequences of a ballooning national debt. Back in 2011, Crapo said, “The single greatest issue facing the nation is the ever increasing federal deficit. Congress, and particularly the Senate, needs to engage fully on a course of bold and productive actions to end the debt crisis in America that is stifling the economy and stalling the fragile recovery.”

That was then. Now Crapo, who once endorsed the work of the Simpson-Bowles Commission to comprehensively fix tax and revenue problems, is embracing a tax bill that will do precisely what he has spent the last decade warning against. Various estimates say the GOP legislation will add a cool trillion or maybe two trillion to the debt. No remotely sane economist says, as Republican lawmakers do, that the tax cuts will pay for themselves.

Meanwhile, the debt ticker runs on Crapo’s website, while he regularly accumulates a political war chest courtesy of the people he really works for – high rollers in the financial services industry who handsomely reward his service on the Senate Finance and Budget Committees.

The conservative National Review generally praised the GOP tax handiwork, while ignoring the obvious self-deal in the legislation, but even the heirs of Bill Buckley had trouble with the debt issue. “Most Republicans say that the tax cut will generate so much extra growth that it will increase revenues,” the NR said in an editorial. “No economic model of the tax cut, not even any of the models produced by conservative economists, backs this claim. It is convenient, though, in letting Republicans offer tax cuts to various constituencies without having to impose any restraint on spending.”

Crapo, in perhaps the most secure Senate seat this side of Alabama, is surely going to get away with this breathtaking display of intellectual gymnastics now that deficits don’t matter again. Or perhaps we should just mark this type of intellectual rot as the perfect example of the school of “I can say and do whatever I want since alternative facts are all that matter in Trump’s America.” And, of course, “the base” – the folks who voted for Roy Moore – will believe the Fox News spin and all will be good.

GOP tax bill writers ignored the experts, ignored corporate CEO’s who said they would give their new tax breaks to investors rather than workers, and they ignored basic facts. Their legislation doesn’t simplify the tax code, doesn’t address vast income inequality, won’t jump-start the economy and won’t improve wages for middle class workers, but it will please the GOP donor class. Give Republicans credit: once they are bought they stay bought.

Congress or the Russian Duma?

If the policy specifics of the tax legislation don’t give you pause then consider the process used to pass the legislation. In the not to distant past the Senate Finance Committee and the House Ways and Means Committee would have produced separate proposals developed during long hours of hearings and committee mark up. The two houses of Congress would then act. There would be ample time for amendments and real debate and the differing versions of legislation would be hashed out in conference.

This process would have seen expert witnesses brought in to discuss issues like whether giving a tax cut to corporations currently sitting on trillions of dollars in cash would really do anything for the economy or for workers. Reducing income inequality, now at the worst level since the Great Depression, might have been discussed and policies incorporated into the legislation to provide a boon to middle class spending, which would really boost the economy. Factual information about how few Americans are impacted by reducing the estate tax might have been brought to light. Perhaps even one Republican would have expressed discomfort in passing legislation that would directly benefit the president and his family. Perhaps even one Republican would have said it would be appropriate to see a certain someone’s tax returns before voting.

None of that happened.

There were no hearings. The slippery Orrin Hatch slipped in sleazy provisions benefiting individual members of Congress and the president of the United States at the absolutely last minute. The conference committee met, but there was no debate or voting on a true conference report. That was all settled out of sight of public or press scrutiny. This isn’t legislating; it is how the Russian Duma makes “laws.”

It requires a willful suspension of common sense to undertake massive cut taxes, while unemployment is low and the economy is in pretty decent shape and while we continue to pile up enormous debt. Only a crackpot economic theory would support such idiocy. Welcome to Trumpian America.

In at least one important respect the Trump presidency has succeeded. The congenital liar has degraded common sense, common decency and common purpose. What a set of accomplishments. His is the tool kit of the authoritarians and his handy enablers are helping him not only enrich himself in the most flagrant manner, but to denigrate the whole public square. It would be shameful if it were not so frightening.

Trump didn’t start us down this path of fact free public policy, but his rants against “fake news” and the steady erosion of public ethics that have been the by-products of his consistently abnormal behavior have now succeeded in polluting an entire political class. It only took a year. That is why we are only in Act I of this tragedy. Or as Tom Ricks writes, “things can get far worse than we ever suspected, and end horribly.”

Fasten your seat belts: The worst is yet to come.

Scott Fitzgerald wrote about them in a novel in the 1920s. The careless people. They are now fully in charge and this is no fiction.